Primarily working with poetry I felt the pieces included here (from a wider project entitiled “Whats The Matter” and originally intended to be companion pieces for certain poems ) could exist by themselves.

Untitled Sketchbook page 17 brings into play elements form Walter Benjamins essay ‘The Work of Art in the Age of Mechanical Reproduction’ – Even if one has a general knowledge of the way people walk, one knows nothing of a person’s posture during the fractional second of a stride’ and continues ‘Here the camera intervenes with the resourses of its lowerings and liftings its interuptions and isolations, its extensions and accelelerations, its enlargements and reductions.The camera introduces us to the unconscious optics as does psychoanalysis to unconscious impulse.

Mounted on aluminium you are invited to ‘meet’ the works ‘What Lies Beneath / Scald’ and ‘Dutch Master’. Originally ‘What Lies Beneath’  was meant as a document of a night of partying, paying attention to the neck area in light of the artists condition while also documenting the treatment of botulinum toxin injected into the neck the previous day.

‘Dutch Master’  and its inclusion of the bra (worn the previous night at the party) came about as a away of framing the scald the artist suffered as a child (as a friend had mentioned the beauty of the scald on his chest) It slighly references the Phototherapy work of photographer Jo Spence.Its title ‘Dutch Master’ came after looking at Vermeers ‘The Milkmaid. 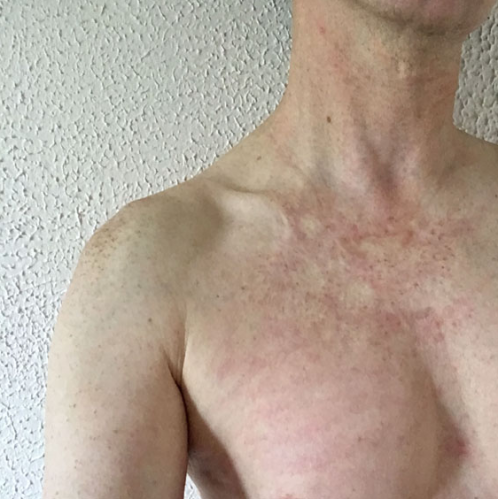